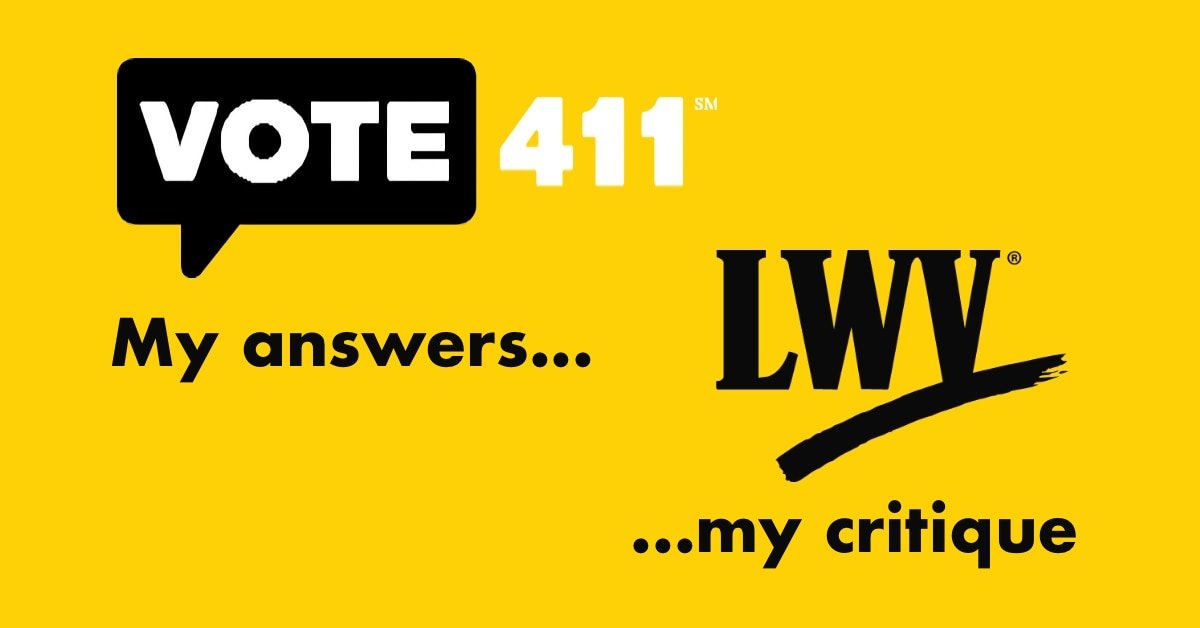 Even though the League of Women Voters (LWV) states on their website that their mission is to work towards the goal of “making democracy work”… also that their Vote 411 guide is a “one-stop-shop” for election-related information… they have declined to include Libertarian Party campaigns, including this one.

The reason, they say, is that our inclusion would be “too confusing” for voters who might be seeking information only for the big-party primaries on July 19. Which I will concede is a rationale with some logic. But is a rationale without either due fidelity to the LWV mission statement or due respect for the Maryland voter.

The LWV itself having declined to publish our responses to their questionnaire, we have decided to publish the Q&A here. Please note that the LWV did perform a translation into Spanish for us. If/when we receive the translation, we will add it below.

Qualifications: How does your experience prepare you for the duties of Governor?

I am an IT executive who brings not only expertise in IT (which Gov. Hogan has neglected) but also success as 1) a policy analyst in Congress, and 2) the CIO, COO, and Chief of Staff of Maryland’s Department of Health. I know how to work with different people to get difficult things done, including in the complex world of government operations.

Economic Iniquities: What role should the state play in addressing the needs of economically disadvantaged people in Maryland?

Especially for disadvantaged communities, the state should expand opportunity for individuals and small businesses. School choice, affordable housing, and safe streets for individuals and their loved ones, along with transportation assistance. Relief from taxes and regulations for small businesses, including a “concierge” service to help Marylanders obtain the state and local permits they need.

Public Safety: What policies do you favor to reduce crime in Maryland while improving police accountability in communities?

Education: What actions will you take to improve education in Maryland, especially given the impact of the COVID pandemic?

Education as delivered through public-monopoly schools in league with self-interested teacher unions has become a failure, especially for youths in historically disadvantaged communities. We need to give all students, but especially poor students, the same privilege that rich kids enjoy: Choice as to where to go to school. The money must follow the child. As is already done for college education.

Health Care: What are the most significant health challenges facing Maryland and how will you address them?

Our most publicized and politicized health challenge has of course been COVID, to which elected Rs and Ds alike reacted with excessive contempt for clinical data, civic debate, and personal choice. Against which excesses, we need restraints on executive powers under future health emergencies. We also need action against the surge in opioid overdoses, offering services instead of indifference.

Natural Resources: What is your greatest concern regarding Maryland’s natural resources/environment and how will you address it?

For the Bay, we must compel Pennsylvania to meet its commitments under the Blueprint for the Bay, so that MD and VA are no longer bearing the costs of fertilizer runoff from PA farms. For the climate, we must recognize per the UN climate panel’s own science that we face a formidable challenge but not an existential threat from carbon emissions. We need deliberate action, not political panic.

Infrastructure: How will you balance infrastructure needs with their environmental impact?

First, I must implore that we quit exaggerating our needs. The Rs and Ds in DC already have splurged on unnecessary and inflationary spending. Second, I commit to managing that which is coming from DC in a competent manner (unlike the Purple Line) while tending to environmental impact, for example avoiding miles of new concrete; for example promoting innovation for east-west Baltimore transit.

Other Priorities: What other issues are priorities for you?

My priority is to restore civility and hope across Maryland. Which has almost nothing to do with policy positions… but has everything to do with possessing a character and advancing a philosophy devoted to respect for ALL people regardless of race, gender, sexuality, politics, or wealth. Which is who I myself am and what libertarianism is, as you can confirm for yourself by following my campaign.

Is this democracy? An open letter to Maryland news outlets Joe Biden and the Democratic Party, including Wes Moore, have been proclaiming that they are the true and sole...
Read More

Hypocrisy, not Democracy A response by David Lashar to President Joe Biden's speech, Soul of our Nation Well, Mr. President, it's actually a constitutional democracy in...
Read More

My Gold Plan for a Green Future