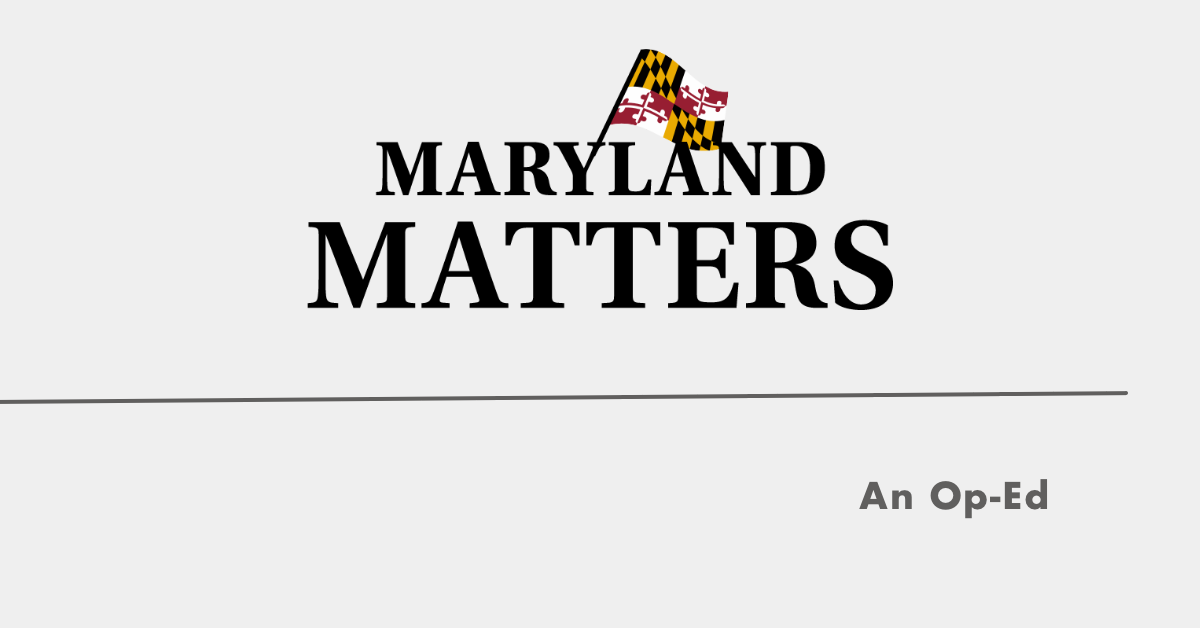 Information technology has not been a hot topic during this legislative session [in 2019… see below for my 2021 update], not even a tepid one. But maybe it should be, given that we are at a tipping point for IT performance in the state, with the ability of all state agencies to fulfill their missions efficiently and effectively at stake.

On the one hand, reforms and initiatives by the Hogan administration in the last couple of years have raised IT capabilities and improved IT service considerably, albeit with much room for improvement.

On the other hand, the structure and strategy for IT in the state has only very recently begun to match the so-called Enterprise IT model that is used across the country in business and government for reliably obtaining IT improvement and excellence.

Thus, being neither long embarked nor firmly chartered, the emerging Enterprise IT model for the state remains vulnerable. And if certain rumoredchanges from the Hogan administration prove this summer and fall to be the actual plan for state IT, the encouraging recent progress toward proper Enterprise IT will founder.

Before getting to the rumors, let me be clear: The Hogan administration has vastly improved IT from the conditions that prevailed when it took office in early 2015.

At that time, the problem wasn’t only that budgets were too low. It was that although the O’Malley administration to its credit had launched the Department of IT (DoIT), raising IT to the Cabinet level, the governance structure and operational model for IT in the state were wrong, as evidenced by the oversight failures that caused the Health Benefits Exchange to implode upon launch.

Also, the mindset was wrong, as evidenced by a deputy secretary at what is now the Maryland Department of Health who refused to allocate funding to upgrade desktop operating systems, declaring that the strategy for the roughly $2 billion unit would instead be to wait for a data breach, then use the headlines and outcry in order to solicit the General Assembly for a larger budget.

Of even greater note, the Hogan administration has sponsored several major IT initiatives that either will deliver first-in-the-nation service transformation or will address decades-long budgetary neglect.

The foremost example of a transformation initiative is the so-called MD-THINK program, which will integrate and coordinate the whole range of health and human services that are delivered by roughly a dozen state agencies to vulnerable and needy Marylanders. An example of an initiative to reverse decades-long budgetary neglect is the two-prong effort by the Department of Public Safety and Correctional Services and the Health Department to implement modern systems for electronic health records for the patients to whom they administer health care services at their respective facilities.

But as valuable as such IT initiatives eventually will be for Marylanders, they are as much cause for concern as comfort.
The reason being: The recent progress might represent a merely fleeting period of solid IT improvement and performance for the state, due to a rumored plan within the Hogan team that, if implemented, would disempower IT as a voice and force within this and future administrations by dismantling DoIT and shifting the IT function (not just IT procurement) to a restructured Department of General Services (which potentially could become a broad-reaching Department of Administration).

The idea is baffling, even troubling, depending on what is being contemplated.

It potentially relegates IT to un-empowered residence within a general control agency, as it was prior to the O’Malley administration. It signals a mistaken belief that managing IT solutions and services is not much different than managing physical assets like office buildings and vehicle fleets.
Again depending on what is being contemplated, the rumored changes could scuttle the promising Enterprise IT model that is finally taking sail in the state; could stifle the voice of IT expertise within the cabinet and to the governor; could dilute accountability for a critical service that affects the performance of all State agencies.

The rumors surely get their legs from uncertainty and risks regarding the Office of State Procurement that will launch within DGS this fall.

If constrained in its IT authority to administrative functions, and if genuinely imbued with a customer-service mindset, the Office of State Procurement might well prove itself a productive partner to DoIT in achieving proper Enterprise IT for the state. But if not, OSP will become a millstone — maybe even worse, if its authority over IT were to extend beyond administeringprocurements and contracts that are planned and managed by IT professionals at DoIT and the larger state agencies under a so-called matrixed governance model.

Given the OSP IT rumors (which the governor’s office has declined to speak about), along with the fact of modern Enterprise IT being so newly launched and poorly understood in the state, the Hogan team and the General Assembly should seek occasion to commit publicly to Enterprise IT prior to the legislative session coming to a close and OSP being launched this fall. The model is depicted in the accompanying graphic and summarized in the next few paragraphs.

Under Enterprise IT, the IT organization is conceived as a transformation agent and customer-service center. It is structured under a federated governance model that accounts both for the different kinds of IT services and solutions that exist in the IT world and for the different needs of state agencies with their various missions, programs, funding sources, and scale. 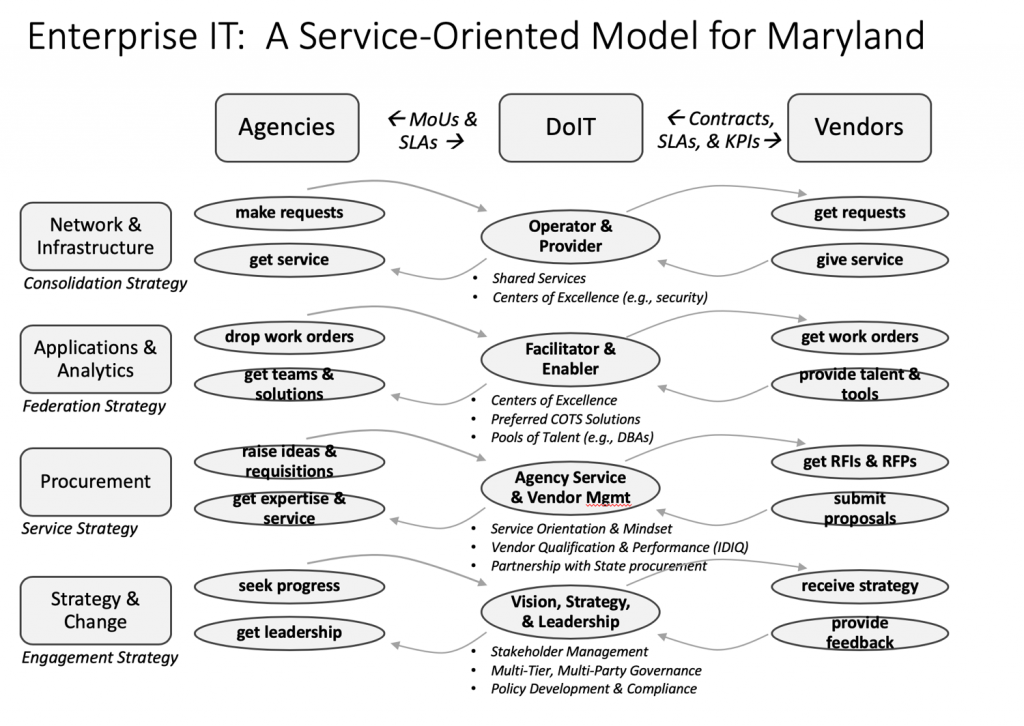 Under the model, the IT organization offers so-called shared services and maintains centers of excellence to support its customers (i.e., the citizens and the other agencies in the state), while simultaneously consuming shared services, notably including procurement services, from the administratively oriented agencies.
Under Enterprise IT, the IT organization ought to offer routine IT personnel and products from a limited set of pre-qualified vendors under the so-called IDIQ approach (indefinite delivery, indefinite quantity) that is prevalent in the federal government; that would be a replacement for the failed CATS approach (Consulting and Technical Services) that was supposed to operate like the IDIQ model for the state but has instead become a case study for bureaucratic inefficiency and ineffectiveness.

As innovations in addition to IDIQ, Enterprise IT for the state should include an independent advisory IT commission along the model of the capable and influential commissions governing key aspects of health care in the state; should create new job classifications with higher pay for specialized IT skills (e.g., cybersecurity) along the model by which the Health Department offers higher pay to medical doctors in state service; and should ensure that IT is as strong a voice in the cabinet along the model that prevails in the boardrooms of modern corporations.

Committing to Enterprise IT

The point here has not been to belabor IT theory and practice. It has been to raise awareness of 1) long overdue state progress toward modern Enterprise IT, and 2) potential threats to this progress and the aborning Enterprise IT model, depending on the scope of IT authority granted to the forthcoming OSP.

If the worst of the DSG/OSP rumors are to be believed, the plan in the governor’s office may even be to dismantle DoIT as an agency, demoting IT in the state back to the auspices of a general control agency, as was the case prior to Gov. O’Malley.

Instead, and regardless of rumors, the governor’s team and the General Assembly should be reinforcing state commitment to Enterprise IT, entertaining IT innovations such as those cited above, and clarifying plans for procurement office responsibilities related to IT.

Nothing less than the ability of agencies throughout the state to fulfill their missions is at stake. Debate and comment on the portentous rumors would therefore seem to be in order.

This analysis and proposal was written by David Lashar and published by Maryland Matters toward the end of the annual legislative session in 2019. David believes that his analysis was accurate and his predictions were prescient, as IT performance within our State government has continued to deteriorate, judging by IT procurements being conducted and, especially for smaller administrations and offices in the executive branch, IT services being delivered.

David does not assign blame to DoIT itself, which has failed to receive the kind of attention and support from the governor’s office that is required for any IT department to be effective on behalf of the broader organization. In David’s opinion as an IT thought leader and executive, the lack of both knowledge about IT and attention to IT from the governor’s office over the last handful of years amounts to a dereliction of duty to State employees and the Maryland citizens who are served by them.

If elected your governor, David will not neglect IT… which, it must be appreciated, affects the ability of each and every employee & program in the State to perform their jobs & fulfill their missions efficiently, informedly, and effectively on behalf of Marylanders.

This issue of IT is but a single example of how David as Governor or Maryland would bring practical experience and relevant skills to the job of doing good work on behalf all Marylanders, even when the issues and the work are not politically enticing or rewarding. It is an example of how David, along with Christiana as candidate for Lt. Governor, are uniquely qualified actually to get things done for Marylanders due to being broadly experienced and genuinely accomplished outside of the political realm, even while being experienced and accomplished within the political and governmental realms as well.

Want to learn more about David's ideas for bringing about a better Maryland for us all? This page provides links to a range of content. The links will allow you to read,...
Read More

Even though the League of Women Voters (LWV) states on their website that their mission is to work towards the goal of "making democracy work"... also that their Vote 411...
Read More